ARE THESE NEFARIOUS TYPES BENEATH ME? 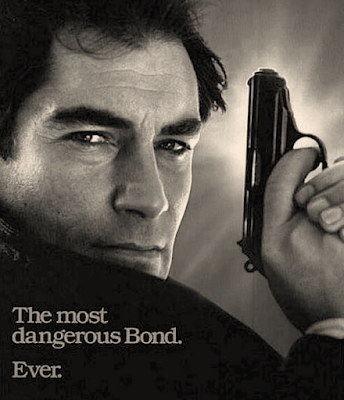 Why’s a no-nonsense James Bond concerning himself with a bunch of comical schemers? Well, to keep those hero-villain dynamics interesting, of course…

There is a scene in A View to a Kill (1985) where a CIA agent updates Roger Moore's Bond on the activities of the super-villain, a sickly remote Industrialist, Max Zorin, played by Christopher Walken. Bond's clipped responses to these kernels of information have a distinctly weary, fatalistic air, most notably his appraisal of one of Zorin’s associates: "Sounds like Zorin's kind of man."

It takes little effort to envisage Timothy Dalton's Bond muttering such a line under his breath. In fact I think this scene in A View to a Kill, now viewed retrospectively, ushered us towards the tone of the Timothy Dalton era; ditto a later scene where Bond, plainly repelled by Zorin's narcissistic boasting, fires back "Brilliant, I'm almost speechless with admiration."

Zorin was a good, if atypical, foil for Roger Moore's Bond because we saw his actions getting under the skin of our more light-hearted 007. And he could shrug off Bond’s “digs” as inconsequential. He would have likely been a very good foil for Timothy Dalton's Bond, too, although for different reasons; Zorin's nastiness would have reinforced this Bond's steely reserve and bristling anger.

However, for Dalton's first film, 1987’s The Living Daylights, he was matched against a crafty – but far less vividly evil – twosome, Koskov (Jeroen Krabbé) and Whitaker (Joe Don Baker). Like their immediate predecessor, Koskov and Whitaker were debased individualists, happy to exploit the ideals of “détente” for their own ends. But their on-screen antics by and large evoked the joviality of misbehaving schoolboys. In many respects, it seemed an odd, even inappropriate, match. You have a no-nonsense Dalton placed against two crims with a clear penchant for facetiousness. All for the purposes of subterfuge, and satiating greed and war-lust, but still…

And yet The Living Daylights achieves a significant level of dramatic interest and intrigue. Like A View to a Kill, its dramatic stakes have a somewhat atypical, unexpected quality. Not a bad thing, necessarily; film-by-film, it keeps things interesting, provided one does not feel too miffed by the alterations to formula. Pierce Brosnan, of course, was initially signed to play Bond in The Living Daylights, and you can imagine the more wry and winsome Brosnan playing off the winsomeness of Koskov and Whitaker. It might have been quite an enjoyable rapport to observe: Bond matching the twosome at their own frivolous game, and in the process, showing up their dark intentions. But playing a frivolous game, however deceptive at face value, never seemed an ambition of Dalton's in his approach to the Bond character. (The Shakespearean actor famously requested that Bond's more “flippant” lines in The Living Daylights script be removed.)1

So where is the intrigue? For starters, whereas A View to a Kill drew its energy primarily from the menace of its villains and the portentousness of their plans, The Living Daylights draws a great deal of its energy from the question marks surrounding the ingeniously knotty machinations of its conspirators. What on Earth are they up to?2 In terms of contemporary resonance, it was serendipitous that the film was released in the wake of "Irangate", although as co-writer Richard Maibaum noted, commentators assumed that the Bond team were riding the coattails of a real life conspiracy, rather than having inadvertently anticipated it ("we found ourselves with a very hot scenario").3

But machinations and resonance aside, a central dramatic strength of the film is also located in the aforementioned seemingly odd pairing between hero and villains. There's actually quite a happy constellation of contradictory character dimensions at play here. To elaborate, Dalton brought a vivid dimension of irritability and short temperedness to the filmic Bond character, a clear reflection of Dalton’s desire to capture the essence of Fleming’s Bond, “a man beset with moral confusions”.4 You could reasonably anticipate that bureaucratic stonewalling and villainous cruelties would be the factors that aroused these tendencies. To a minor extent in The Living Daylights, they are; but the principal source of Bond’s irritation comes with the mounting realisation that his “buffoon” antagonists – seemingly an unworthy match for his steely reserve and fortitude – are actually orchestrating their deception with great finesse. Now there's a unique way to irritate a skilled operative. And it proves a compelling dynamic, and a unique dimension of The Living Daylights.

Koskov, in particular, is a very skilled manipulator, and Krabbé injects moments of sly certainty into his characterisation. Whitaker, meanwhile, is given an edge of both the novel and the foreboding through his fascination with war and military strategy – and his idolisation of “great" commanders such as Napoleon Bonaparte, Adolf Hitler and Genghis Khan. (When an opponent classes them as “butchers”, the otherwise blustery Whitaker coolly corrects him: “Surgeons. They cut away society’s dead flesh.”)

On a Bondian level, both characters possess a mild sense of the sinister. Interestingly, taken together, they evoke Gert Frobe’s lively and excitable – and wily – iconic super-villain, Goldfinger (from the 1964 film), although to facilitate The Living Daylights’ multiplicity of deceit, the pair obviously can’t be revealed to the audience with that same transparency of passion and purpose that Goldfinger vividly conveyed in his comparatively simple tale. And clarity of ambition is a good part of what made Goldfinger so memorably dangerous a villain. Fortunately, what the pair are permitted is a henchman – and Andreas Wisniewski’s Necros proves the essential element in ensuring that the villainous dimensions of The Living Daylights carry not only dramatic weight, but also a strong air of the sinister. (And additional credit in the ominous stakes must be given to Carl Rigg's stone-cold assassin in the film’s pre-credits sequence.)

The Necros character is not without some political dimensions, but chiefly he is on shadowy murderous duties, à la Red Grant and May Day. And while Necros is situated within a film with "ghetto blaster” gags, he is the one who is given a more baroque nod to 1980’s music culture; he stalks about with Chrissie Hynde’s “Where has Everyone Gone?” playing on his Walkman - his Michael Myers-style leitmotif - and it signals his nearby presence.

From another perspective, Necros provides the menacing support that, structurally speaking, gives space for Koskov and Whitaker to deliver a more left-of-field villainous routine without audiences objecting. John Glen, who directed all five official Bond films in the 1980s, has said, "The balance between hero and villain fascinates me".5 It's just as well, as during his tenure he presided over a range of hero/villain dynamics that were often unconventional in effect. And, as described above, a unique balance was found in the odd dynamics of The Living Daylights. Then, in 1989's Licence to Kill, Dalton's no-nonsense, short-tempered Bond would face a more grandiose and explicitly powerful baddie, a man whose fine line in dark humour balanced Bond's general humourlessness, and who, for all his sadistic lapses, attracted some unexpected pangs of sympathy as Bond went about manipulating him. Balance can be found in the strangest, least explored of places.

Indeed, from A View to a Kill through to Licence to Kill, we see perhaps the most sustained period of left-field, less-than-obvious hero/villain dynamics, with only a number of subsequent films such as The World is Not Enough (1999) and Skyfall (2012) capturing a similar air of the off-beat – that world away from the more conventional dynamic of "super-villain as Bond's informal competitor".

In a concluding scene of The Living Daylights, Koskov makes a last ditch appeal to his KGB superior, laying the sincerity and gratitude on thick. Bond looks on - tired, disbelieving, exasperated. He offers no improvisation, or even an irritated defence; instead he can only wait to see how Koskov's routine will play out with the general. The moment is an apt one: Koskov and Whitaker have twisted and turned Bond in so many directions, that a moment of overwhelmed blankness on Bond’s part seems an entirely reasonable response.

You think these men are buffoons? That's what they're counting on.

1 Lee Goldberg, 'Timothy Dalton: The Knight of "The Living Daylights"', Starlog, October 1987, p. 39.
2 As James Chapman points out, “While the narrative [of The Living Daylights] clearly belongs to the sensational thriller in that it revolves round the requisite action sequences, fights, chases and so on, the convoluted plot of a defection that is not really a defection at all is closer to the world of John le Carré, with its themes of treachery and deception, than to the more familiar world of the Bond films where the lines of opposition are usually clearly drawn.” (Licence to Thrill: A Cultural History of the James Bond Films, 2nd revised edition, London: I. B. Tauris, 2007, p. 199)
3 Lee Goldberg & Edward Gross, 'Richard Maibaum: Veteran Screenwriter for a Brand-New Bond', Starlog, July 1987, p. 82.
4 Goldberg, Starlog, October 1987, p. 39.
5 John Glen, For My Eyes Only: Directing the James Bond Films, 2nd revised edition, Cambridge: Signum, 2015, p. 198.