A SPECTRAL RETURN TO THE BONDIAN GROOVE 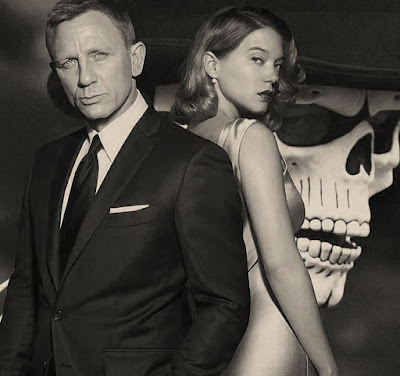 Spectre marks a return to the more episodic structure of Bond films pre-2006, with a cruisier journeyman-hero in tow. A level of critical indifference has been inevitable, and yet Spectre is a top-notch reminder of how this structure has worked so bleeding well…


There have been murmurs of critical discontent with Daniel Craig’s fourth James Bond film, Spectre. The discontent partially concerns a relatively new trope of the James Bond film series: the revelation of a shadowy figure from Bond (and/or M’s) past. The finer points of Spectre’s revelation significantly realign our understanding of all the previous conspiracies Craig’s Bond has faced, and will likely continue to face in subsequent films.

The overarching discontent, though, relates to the series returning to a pre-2006 narrative template – a “travelogue espionage” of interconnected episodes. It's a change from the more thriller-esque, angsty and character-driven narratives of Craig’s previous three films: 2006's Casino Royale, 2008’s Quantum of Solace and 2012’s Skyfall.

While Skyfall often evoked a travelogue connect-the-dots, the creative team presented a simpler, less convoluted conspiracy by focussing on explicit personal dilemmas for both Bond and M. Similarly, Casino Royale (or “Bond Begins”) was a more straightforward affair with the effective character arc of “attaining one’s stripes”. Even Quantum of Solace, typically charged as underwritten and overheated, offered a significant character dimension in that it picked up and expanded upon Bond’s Royale-induced grief. Spectre, by contrast, offers a convoluted conspiracy. It has its character bits, yes, but it's far more an adventure. Within this context, we see less of the driven man in James Bond and more of the journeyman; a new dimension for Craig’s Bond, but a more conventional element in Bondian cinematic lore.

The overall critical and audience reception towards Craig's previous Bond films has suggested that the films have captured an additional audience - a "crossover" audience, otherwise immune to the charms of the Bond universe - through a focus on character arcs and emotional dilemmas, and a stepping back from some of the series' usual tropes. A central figure in these revisionist instalments is Daniel Craig himself, an unconventional yet highly interesting and satisfying choice to play James Bond, and one who has overwhelmingly captured the enthusiasm of a worldwide audience.

However, given that Spectre guides us towards a more traditional Bond template, it will likely be placed in the category of "a good Bond film", rather than a good film, an all-rounder, like Casino Royale or Skyfall. And that's okay (or should be), as the Bond films have always been their own particular brand of great cinema. Not always critically endorsed, mind you, but a large audience has continually enjoyed the series' episodes of suspense and the enveloping sense of adventure. The reception for a film such as Skyfall is the icing on the cake.

But classifying an instalment as a good Bond film, rather than as a good film, appears to minimise the artistry on show. It would seem erroneous, even unfair, to assume that the creative team of Spectre are coasting on autopilot. And, of course, even if the filmmakers did wish for a Skyfall/Casino Royale-style redux, the difficulty now is that the pool for other significant emotional trials has narrowed. (Given those previous trials, perhaps Craig's Bond has earned himself a mission with a more adventurous spirit, anyway; his “going rogue” - which by now is another formulaic element of the series - notwithstanding).

Thus, in returning to a more episodic structure with a journeyman Bond, the conspiracy rises more evidently to the fore – it needs to – and Spectre, fortunately, delivers the most vivid, resonant conspiracy in the Craig era thus far: the dawn of total surveillance. In linking surveillance – vis-à-vis unfettered capitalism – with the famous SPECTRE organisation of the Ian Fleming novels and Connery films, the film carries an unsubtle but strong metaphor about the death of privacy (a metaphor solidified by the film’s melange of death-related references, symbols, quips and themes) and the exploitation of private information. "He's everywhere!” might be a crushingly corny line of dialogue was it not proclaimed in a post-Snowden world. From crazy industrialists to covert arms dealing, the Bond conspiracies often-times capture the zeitgeist; the travelogue narratives have bite.

Therefore, if it's approached with thought and care (and the Bond films, in general, are more than simple blunt instruments), a convoluted conspiracy can steadily build and engage well beyond the formalities of Point A leads to Point B, leads to Point C (and so on). Furthermore, the episodes and set pieces are also unified by factors such as a strong and unique villainous presence, characters and subplots that illustrate the residual impact of the central conspiracy or provide a counterpoint to the super-villain's (or even Bond's) value-system, and motifs (musical, visual, dialogue) that often provide a play on the film's title and/or the super-villain's conspiracy. Spectre delivers on all these levels, often with a ghoulish, arch or melancholy touch.

Gliding through it all is Craig in the aforementioned journeyman mode. Perhaps this will be felt by some as a regressive move, softening a directness in Craig's portrayal. But Craig seems tuned in to the compensatory strength of the journeyman: in this mode, Bond is sufficiently relaxed to become a wry observer of his surroundings. One of the major appeals of Craig's performance in Casino Royale was an edginess and unpredictability. For Spectre, the glimpses of wryness in his previous performances have now become a characteristic part of his Bond. The skilful emergence of this quality is not unlike the increasing human dimension in Moore's characterisation or the increasing self-effacement in Connery's, or even the warmth that seeped through Dalton's steely demeanour. It adds another dimension to an actor's portrayal, just when we think we have his characterisation figured out, and it helps ensure we still hang on Bond's every word, inflection, gesture, and ironic expression.

It should also be reminded that even while the provision of emotional dilemmas and character arcs in previous Craig films has worked extremely well, the cinematic James Bond has always been a fascinating figure to watch regardless. Well before the emotional/spiritual dilemmas there was an anticipation in how Bond would respond, say, to the quirks of a new baddie or the temperament of a new heroine. How does Moore's Bond respond to a boasting sadist - or a fragile Bond girl? How will Dalton's Bond respond to a clownish but effective pair of conspirators - or a cheerfully naive Bond girl? How will Brosnan's Bond respond to a treacherous villainness whose "innocence" has otherwise blindsided him? The nuances are there to be found and enjoyed. We do not always need character arcs to prompt us towards them.

Interestingly, in an editorial for Industrial Scripts, Spectre was deemed as lacking, not for its traditional plotting or its journeyman, but for the familiarity of its iconography. Whether it is a base in the desert, sexual tension on a train, a major confrontation in London, a disintegrating plane, or a figure from the past, the Daniel Craig era has now acquired a whiff of self-plagiarism.1 The article's conclusions ultimately raise the question: even with all manner of variations on the formula that Spectre offers, does a sense of déjà vu weigh down one's receptiveness to the inventiveness? On the evidence of Spectre (and many a Bond film before it) I would argue "no" – even though the film's trailers seemed to suggest that an overly familiar Bond flick would be delivered. But as is typically the case with the Bond series, the trailers suggest spectacle, but rarely capture the level of craft, detail and individual flavour of each instalment.

Spectre has much idiosyncrasy to admire. The pre-credits sequence (with a touch of evil) speaks for itself, but then, for example, there’s Lea Seydoux’s Madeleine, whose warmth and spirit in spite of a sad past effectively holds a candle for all the victimised female characters who have appeared in the Craig films thus far. The “smart blood” subplot, meanwhile, links the Bond character to the film’s conspiracy in a smart and thought-provoking way, and emphasises that with this new level of surveillance, Bond will become ever more dependent on Q’s assistance. (This is just fine, by the way, as Ben Whishaw’s characterisation is already showing signs of holding as strong an appeal as Desmond Llewellyn’s.) It is also a terrifically effective conceit that, for a film with mass surveillance at its heart, the visual references to the technology are relatively slim, so much so that when a door is opened to a darkened (and seemingly endless) surveillance room, the moment is a genuinely creepy one. He’s nowhere – and everywhere!

And if Spectre still left you cold, well, at least admire the chutzpah of the filmmakers placing a female subordinate who closely resembles Mindy Sterling’s Frau Farbissina from the Austin Powers trilogy (1997-2002) in amongst the attendees at a wonderfully tense SPECTRE meeting. What verve, what confidence! And then there’s the cat, with Bond’s “Hello pussy” reminding any past or would-be spoof-ers that the Bond team can tip their own hat to parody, thank you very much, whilst keeping the dramatic stakes in motion.

And then there’s the cat’s owner. The purpose of this piece has not been to delve into the film’s big revelation. That’s a piece all of its own. A few observations, though: the revelation of a familial link gives the film’s third act a suitably crazed and surreal air (an excellent piece in Entertainment Weekly proffered that the third act entirely exists in Bond’s mind,2 and I’ll be damned if it’s not a halfway feasible theory). But the psychology of Christoph Waltz’s sinister super-villain, of course, needs a little more exploration in subsequent films, as I can’t imagine the filmmakers are positing sibling resentments as the sole driver for a fruitful career in super-villainy. Or if they are, let’s delve deeper into the why.

The way it appears things are being set up, a more character-driven Bond film may return. But don’t forget a good adventure in the process.