A LITTLE POETRY WITH JAMES BOND 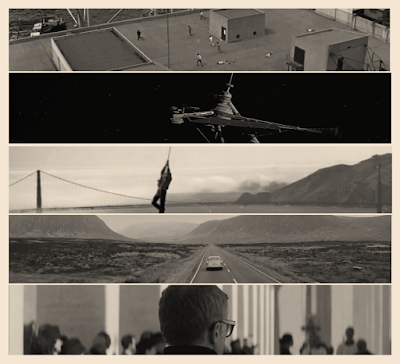 The title may sound suspiciously like a Saturday Night Live skit. What I'm describing, though, are the sorts of moments in the James Bond film series that deliver a decidedly unanticipated impact. Well, unanticipated for the genre, that is. They are moments that, at face value, could have been afforded minimal weight by the creative team. But through a most interesting utilisation of filmic elements such as music, location, camerawork and feverish dramatic stakes, these moments shine. Although they are often fairly brief in length, they remain strong examples of how an atypical moment or two (or three) can enrich one's enjoyment of a Bond film.

The following list is not a complete one, but it should certainly provide a strong sense of the unconventional flourishes I'm alluding to...

You Only Live Twice (1967): Rooftop Fight at Kobe Dock
As Sean Connery attempts to escape a large group of thugs on a sprawling rooftop, the camera could have stayed at close quarters. Instead of going for the tension - and the close-range biffo - we go for the operatic, with the camera lifting above the participants - and keeping that high perspective for an extended period of screen-time. It’s a sublime wide shot, with John Barry's accompanying fanfare reaching an appropriately absurdist peak (the trumpets sound the next best thing to strangulated). This unexpected God's eye view of the James Bond universe is to be admired; over-the-top and artistic in the same breath.

The Spy who Loved Me (1977): Murder at The Pyramids
In many respects it's the standard trope of "a nearby concert mirrors/complements the action unveiling before us", with a suitably melodramatic cue accompanying Jaws' advance on some poor doomed soul. But following that creepy business the music becomes tongue-in-cheek inspired; most notably, breaking into a heavenly choral as Agent Anya Amasova is revealed to Roger Moore's Bond. And the choral is given a final flourish as lackeys assisting her try to get one over on Bond. To no avail, naturally. "Hope you enjoyed the show," a slightly put out Bond mutters to Anya. We did indeed, thank you.

Moonraker (1979): Flight into Space
Moonraker is a lark, a very expensive one, but a lark nonetheless. Yet it hits a simultaneous note of the grandiose, the ominous and the soulful as the shuttles launch into space and the super-villain's off-the-radar space station is sighted for the first time. The special effects are impressive, and seek to evoke awe (rather than trigger the adrenaline); but the hairs on the back of the neck are courtesy primarily to the magisterial composing of John Barry. Honestly, Barry's music is all the psychology we need (well, perhaps not all) to access the mind of a madman seeking to remake the world in an idealised form. You have to admire the delusional ambition - and perhaps overlook the intended asphyxiation of the present population to achieve such intended "nirvana". With Barry's music in your mind, you may find yourself prepared to!

A View to a Kill (1985): Approaching the Golden Gate Bridge
The dark turquoise beauty of San Francisco Bay, an aged hero hanging by a thread, an iconic bridge coming into sharper and sharper focus, an angelic-looking madman anticipating the moment of impact ... and that Barry gentleman again winning us over, eschewing an action cue in favour of a weighty, funereal rendition of the film's romantic theme. Whoever suggested an escapist flick couldn't have its own moments of over-the-top poetry? Superb, Mr. Bond, superb. And A View to a Kill actually has many more moments of this ilk; for the purposes of a more even distribution of moments across the series, I'll restrain myself.

The Living Daylights (1987): The Three Man Descent & A Ferris Wheel Ascent
Barry again. Here, a breathtakingly beautiful pre-credits freefall is accompanied by a gentle tinkling of underscore (courtesy of flute and strings) that evokes both a sense of wonder and a sense of unease. Later, midway through the film, Bond and the girl take a ride in a ferris wheel. Bond has romantic intentions, but for a brief moment he is taken with a sight below, a man with balloons circling his soon-to-be-dealt-with colleague. The stalking man has a signature killing theme, a Barry-Chrissie Hynde collaboration, that wafts in and out of the soundtrack, signalling his presence. It's the Bond series elegant variation on Halloween's boogeyman.

GoldenEye (1995): Descent from a Copter
GoldenEye made some explicit attempts to delve into what makes Bond tick, and it did so via an eager current of psychopathologising. And yet one of the moments we feel closest to Brosnan’s Bond involves not a spot of dialogue. In the wake of a small plane crash, Bond rouses (with the camera, at first, firmly focused on his eyes) to find a helicopter, silhouetted by the sun, hovering above. Eric Serra's synth beats play off the muted, repetitive thump of the copter's rotor. Bond rises to his feet, seeking a closer look at this surreal sight; a rope is thrown from the copter's side door and, within moments, a familiar wicked witch appears. Bond may have awoken, but it's as though he is still trapped in a dream.

The World is Not Enough (1999): Q's Descent
It's one of the most memorable moments in the film: an adios to Desmond Llewellyn’s Q. Presented quickly and without fuss, it also achieves a surprising level of poignancy without being in any way forced. Q's proclamation to Bond - "Always have an escape plan" - is reinforced by his immediate descent into a hidden floor below. He keeps his gaze on Bond until he disappears out of frame - and out of our sights. A melancholy accompanying note from composer David Arnold marks a segue-way into a scene where Bond is visibly touched by an MI6 report on a traumatised Bond Girl. The tone of this subsequent scene is handy, allowing us an extended lament for Q as well ... without having to admit to such things!

Quantum of Solace (2008): Arid Plains
There is a discernible thread of sadness (and rage) throughout Quantum of Solace. Following a grim discussion of murdered loved ones and the desire for revenge, a weary Bond and an affectingly haunted heroine leave their cavernous retreat and seek terra firma. David Arnold accompanies their multiple dissolve journey over arid plains with the energetic yet poignant strumming of a Latin guitar. Our heroes pass by and appraise impoverished locals, a reminder of the human cost of mad men's greed.

Skyfall (2012): A Storm's Coming
It seems a risky proposition to delve into Bond's ancestral roots. But here is one hugely effective way you can approach it ... very gently. The scenery is stunning (and appropriately desolate) as the Aston Martin makes its journey home through the Scottish highlands. But in this instance a typically lush orchestral accompaniment deserts us, and we are instead given an ethereal, quivering choral from composer Thomas Newman. The overall effect marks one of the most inspired moments in the film and, arguably, is one of the best moments in the entire series.

Spectre (2015): A Funeral and a Furious Wake
Newman's quivering choral returns, most notably in an atmospheric funeral scene populated by mysterious attendees. It's a most welcome encore. At a later point, we are given a great contrast, with the Bond theme being accompanied by a resplendent choral as Bond makes a vehicular escape within the golden nighttime glow of Rome.

A resplendent accompaniment to the Bond theme seems an apt point in which to sign off on the subject. While we can always be assured Bond will return with the "comfort of sameness", equally we can be assured he will return with some moments that engage in a manner well beyond genre expectations.