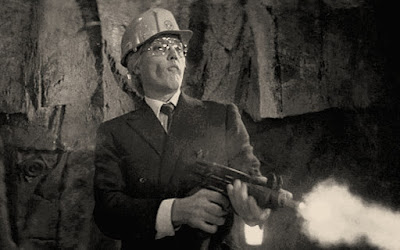 [With A View to a Kill,] I did not go to ‘rushes’ every day … to see what we shot the day before, which I normally did [with the Bond films]. So it came as a surprise to me when I saw the premiere … to see so much violence. It seemed to me a much more violent film than any of the Bonds I’d done up till then. I preferred the old style Bond – not so many people were killed at the one time.
ROGER MOORE2

‘It seemed to me a much more violent film...’3 The sadism has definitely been taken up a couple of notches, and this can impact on how violent a film is perceived as being. The force of the water bursting through the tunnels, and the resultant collapsing structures, is vividly portrayed. The sound design is fantastic. You could be forgiven for initially thinking Zorin and Scarpine’s machine-gunning of the scampering, petrified men is a merciful gesture, salvation from the horror of drowning. However, such thought is dashed when we see Zorin in medium close-up, unable to contain his laughter at the crazy spectacle of it all. What a grand opportunity to live out childish dreams of omnipotence. Dubious as it may sound, Zorin’s joyful amusement at the destruction he has orchestrated is one of the most memorable elements of A View to a Kill. As Jeremy Black puts it, ‘Zorin [at this point] is a satanic figure, rather like Jack Nicholson’s portrayal of the devil in [1987’s] The Witches of Eastwick’.4

Roger Moore’s reservation towards this sequence was also reflected in some critical notices.5 For instance, in writing about the film’s PG (parental guidance recommended) rating in the United States, The Bulletin’s Gene Barton cautioned, ‘[A View to a Kill] contains the most wanton Bond violence ever … a PG-13 rating [parents strongly cautioned] would have been more proper’.6 Such reservation is understandable: even within an escapist context, the sequence is a disturbing one, with surely fifty or more men (and two of the three henchwomen) losing their lives in Zorin’s double cross. And yet while it represents a toughening up of the Bond formula, for the regular attendee of Bond films (or the attendee of any number of films in the action-adventure genre), the sequence clearly turns a Bondian – and action-adventure – staple on its head.

The details that accompany Zorin’s betrayal – the poor souls caught in the spray of machine-gun fire, the electrocutions, bodies falling from great heights – immediately quote the famous large-scale set pieces from Bond films such as The Spy Who Loved Me, You Only Live Twice and Goldfinger. But those sequences depicted a confrontation between allied forces and the super-villain’s private armies. Given that A View to a Kill delivers the trappings of a Bondian battle sequence, but does so to depict a one-sided, cold-blooded betrayal, there’s inevitably a subversive quality to the action. The violent details that were once the consequence of a clash of ideologies (and formula dictates that one side must be spectacularly misguided) are here the result of egotism and a warped pragmatism. Therefore, the sequence cannot help but force us to appraise those past death-ridden ‘spectacles’ from a new, more sobering perspective. (That is, if we haven’t already rejected the filmmakers for spiking our drink.) There’s no glossing over the human cost here. The sequence is one heck of a metaphor for business-like cruelty, capped off with Zorin’s cool observation: ‘Good. Right on schedule.’ Had the film been directed by Oliver Stone (highly improbable, yes), we might have viewed the sequence as a sledge-hammer ‘fantasy-based’ invocation of the worst of the capitalist spirit: the ever-growing appetite and entitlement of the individualist, the dearth of empathy in the greed-driven, the lives of workers of minor consequence beyond the profit motive.

Perhaps we can take solace in our knowledge of Zorin’s steroids heritage. No ordinary person could do this. Interviewed in 1989, writer Maibaum was at a loss as to why he and Wilson felt the backstory was necessary. ‘Maybe we loaded that part with too much,’ Maibaum mused.7 Of course, if we remove the steroids references, we might be left solely with the unappetising possibility that Zorin had been driven crazy by capitalist zeal. (Whoever suggested the Bond universe was fanciful?) On the other hand, the discourse reassures us that those who exploit the fragile interdependency of the Western economic system will not escape unpunished. We could also take solace in the discourse of an ex-KGB man cursed with the inability to self-regulate his capitalistic fervour. Except we know this sickness extends to Westerners as well.

There’s something about A View to a Kill: the ambitions of the super-villain typically denote a perversion of the capitalist ethos, and Zorin is no exception. It is just that the perversion of this film – the jolly arrogance, airships emblazoned with company logo, the disposable girlfriend, the workers past their use-by date, the dead-eyed stare at the suffering of others – strikes a little closer to home than one might wish for this type of escapist fare.

Does the sequence belong in a Bond film? Does it belong alongside Roger Moore-Patrick Macnee double acts and crumpled police cars? An admiration for the blending of tonal elements has already been stated; the Bond film genre is a largely accommodating one. A View to a Kill keeps some of the fun elements, but it doesn’t overbalance itself with them, á la Moonraker, and it moves into some darker territories. Given earlier scenes and images – the pilots awash in the flare’s wake, the dark figure rising behind Tibbett and Chuck Lee, the murders of Klotkoff and Howe – there is the sense that we have reached the place the filmmakers have been leading us towards.

We might even forget for a moment that we are watching a Bond film; until, that is, we are delivered another example of offsetting the violence with humour. In this case, the camera zooms in on the lone fisherman, standing, ever so mystified, in a wide, empty lake. And true to form, the sequence does not fall into what The Spokeman Review’s critic Richard Freedman described as the ‘lip-smacking sadism of other [1980s] action adventures’.8 It overwhelmingly conforms to the level of graphic detail shown in previous Bond films, which is to say, the detail is minimal. The one exception would be Klotkoff’s death; but while that moment is chilling in its clinical presentation, you could hardly accuse the filmmakers of lingering.