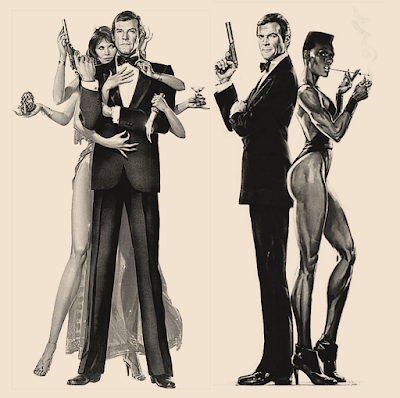 My partner and I attended a double-bill of Octopussy and A View to a Kill on Saturday, 15th November, 2014, at Melbourne’s iconic, art-deco Astor Theatre.  This double-bill formed part of a James Bond Festival, where nine Bond films were shown within a five-week period. All were presented in a gloriously sharp 4K picture.

Well, I assume it was glorious – my long-distance vision has been leaving a little to be desired lately (too much staring into computer screens and mobile phones) and we had to sit towards the back of the theatre, anyway, as my partner is in her third trimester and we needed a spot where she could raise her legs (to manage the “cankles”) without obscuring the view of nearby patrons. The 4K picture, alas, didn’t seem that sharp. Take that assessment with a grain of salt.

I can, however, confidently pronounce that the sound was fantastic; demonstrated to best effect during the elevator shaft scene – a scene that has always carried a level of intensity, but never more than at this screening. The groans and booms created a very palpable sense of claustrophobia.

Perhaps the main pleasure of this double-bill was noting how markedly different in tone the two Bond films were. You could think you were watching films that had come from two different creative teams. Octopussy has a lush, almost celebratory air, while A View to a Kill feels a definite step into darker territories, despite its gags. Roger Moore even seems to deliver his quips at a lower pitch in A View to a Kill, and said quips become quite sparse in the film’s second half. These are qualities I discuss in A Close Look at ‘A View to a Kill’, but it doesn’t hurt to have them reinforced, or have the memory jogged.

My partner was similarly struck by the change in tone from film to film. Her second observation regarded Zorin – “Was Zorin the first Bond villain who is seen to kill so many people?” – and we discussed how A View to a Kill provided audiences (or rather, took audiences aback) with a small-scale example of how the super-villain’s intended havoc might actually look.  In recent months I have been taking her through the Bond series (what a trouper!), via Blu Ray, and thus she’s duly noting the distinguishing qualities of each film, which I think any admirer of the Bond series – or any long-standing series, really – can relate to.

She also asked whether A View to a Kill was released after Oliver Stone’s Wall Street, a la Moonraker riding on the coattails of Star Wars; “No, no – ahead of its time,” I humbly responded, hoping the filmmakers could feel such positive vibes emanating from Melbourne. And through this double-bill, I was reminded of just how singular and unusual a villain Zorin was back in 1985 (and probably still is), particularly coming on the heels of the classic “smooth sophisticate” mould embodied by Louis Jordan in Octopussy.

Octopussy, of course, remains a classic “summer movie” Bond, what with its colourful costuming, abundant quips, mad Russians, crocodile disguises, circus suspense, and all-female troupe. The audience of about 250 people were continually amused by Roger Moore’s droll delivery of his lines; this Bond is very much about being comfortable in his own skin, and the audience seemed happily attuned to this quality.

Eyesight may have been a tad wanting, but still...a great night.