WHOSE FANTASY IS JAMES BOND, ANYWAY? 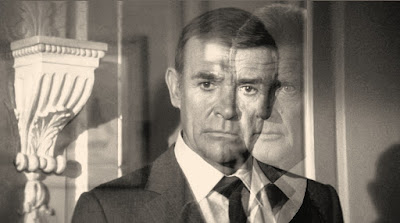 Fancy an uber-smooth mocking imperialist? Or would you prefer a self-parodying take on such aspirations? James Bond, surprisingly enough, is your man on both counts.


The lifeblood of Never Say Never Again is Sean Connery…with Roger Moore doing a little string pulling along the way. Say what you will of the troubled 1983 James Bond production, but Connery’s portrayal, coming 12 years after his retirement from the official Eon series, is tremendously satisfying, and quite possibly one of the defining incarnations of the cinematic James Bond character.

Yes, this Bond is many years older than the mid-thirties ideal, but he is more relaxed in himself and self-effacing. He is occasionally mocking towards the modern world (which regularly mocks him), but rarely cruel. The sly, self-protective grin of a younger man, for whom indications of vulnerability in himself or others would have been anathema, has given way to a more open, wry grin.

So how does Roger Moore figure? In Sinclair McKay’s book, The Man With The Golden Touch, a witty and engaging overview of the Bond film series (and the cultural milieu impacting on it), McKay makes an undoubtedly controversial, and equally very reasonable, assertion regarding Sean Connery’s unofficial return to the Bond character.

In the twelve years since he last carried the Walther PPK, Connery has somehow turned into Roger Moore. Both the script and Connery’s wry approach to it are as broad and humorous as any of Moore’s outings…And Connery’s self-deprecating facial expressions are a further bonus. It is here that we can see most clearly how he would always have preferred Bond to be: that is, a light-hearted Roger Moore figure. It works.[1]

Did Connery intend to make Bond a more wry, self-deprecating figure, a figure that sits comfortably alongside Roger Moore’s portrayal? For the many who preferred Connery’s crueller, sardonic sixties interpretation of Bond to Moore’s glossy, less physically imposing seventies version, the question undoubtedly would be: why should Connery even bother trying?

Connery, like Moore, had similar doubts during his "official" tenure as to how seriously one could actually play James Bond, but obviously there was variation in how each man’s doubts were manifest in their portrayals. Where, in retrospect, we begin to see Connery and Moore’s portrayals merging is in 1971’s Diamonds Are Forever, Connery’s final Eon Bond film, and the film that directly precedes Moore’s introduction to the role. In Christopher Bray’s fascinating, forthright analysis of Connery’s filmography and cinematic presence, Sean Connery: The Measure of a Man, he notes, from Diamonds Are Forever onwards, an alteration in the tone of the films and the Bond character; it is an alteration that leads us not only towards the Moore era, but Connery’s return in 1983.

How to explain, though, how [Diamonds Are Forever's co-writer, Tom] Makiewicz’s script gives Connery’s Bond so little to do? And how to explain when it does give him something to do, it has him invariably fluffing the task?…How much of this change was…acceptance of Connery’s…steadfast insistence that Bond couldn’t be taken seriously it is impossible to say. What we can say is that by taking out any pretence at seriousness out of the character and the movie, Diamonds are Forever helped invent the emasculated Bond that Roger Moore would play for the next seven pictures in the series.[2]

While Bray held a low opinion of the Moore era – feeling the vibrant, if amoral, essence of the cinematic James Bond character had been diluted – he nevertheless notes that audiences could embrace a different interpretation of James Bond.

Leftist cultural pundits had long decried Bond as a reactionary throwback. On the evidence of Diamonds Are Forever and the subsequent Moore years, though, audiences loved the idea of Bond as a ham-fisted amateur quite as much as they had loved him when he was a mocking imperialist trumpeting the fantasy values of a fast-decaying Britain to the world.[3]

Thus Bray, like McKay, acknowledged the existence of another viable, or at least audience-accepted, take on James Bond. However, what McKay suggested in the opening quote was that there was a strong legitimacy in the Moore portrayal, so much so the makers of a rival Bond film (even one that starred Sean Connery) may well have taken serious notes on the appeal of the Moore films.

Furthermore, the filmmakers, and Connery himself, may have felt a complete return to the Bond of the early sixties – ‘a man’s man whose sadistic misogyny…mirrored the self-contained masculinity of the era’[4] – was potentially off-putting to a modern audience, circa 1983. As academic Jaime Hovey observes, ‘the more comic later [Bond] films of the post-Vietnam seventies’ with ‘the ironic self-presentation of Moore…suggested cultural misgivings about the correlation of machismo with heroism.’[5] And as author Andrew Rissik (The James Bond Man: The Films of Sean Connery) notes, with some clever relocation, the Bond figure could continue to hold a degree of cultural significance; perhaps not to the level of ‘cultural phenomenon’ that had marked the cinematic character’s introductory years, but significant nonetheless.

In a sense, the new Connery-Bond is a wry old-world hero perpetually one step ahead of the nuclear age. Characteristics in the sixties that marked him out as an amoral pleasure-seeking hedonist seem, in the new film, to be the attributes of a chivalric nuclear hero. The new Bond is a cynic and a humourist, all right, but he saves the modern world while cocking a snook at its pretensions. This time the deflating wit is essentially the hero’s way of insisting on a sense of proportion.[6]

So, the Bond figure, so brashly defining in the sixties, has mellowed (in both Connery and Moore's hands) to become a reassuring figure – by way of his ongoing existence – in new decades that increasingly render him an anachronism. Arguably diluted, he manages to do his bit for Queen and Country. Occasionally looking a tad ridiculous in the process, but appealingly so. Four decades since the swinging sixties a bit of self-directed ridicule is now a part of Bond’s appeal.

But I wonder, based on McKay’s endorsement of the Connery-Moore merging, and Bray’s dismay at the same merging, just whose fantasy James Bond belongs to? Which "individual type" could the filmic James Bond fantasy be catering to primarily? Is it the individual emboldened by a sense of smirking superiority and entitlement? Or is it the individual who travels through life with the pretence/attempts of self-assurance, but who recognises – and is even amused by – its illusory qualities?

For all the formulaic dictates of the Bond films, there is much fluidity to be found within. If, in the above example, the former (smirking) type best reflects your core principles, I’d suggest the sixties Bonds will be your most satisfying experience with Bondage (along with the sarcastic mid-nineties Brosnan-Bond of  GoldenEye and Tomorrow Never Dies). If you belong to the latter, more self-effacing type, anything after 1969, bar perhaps the aforementioned first two Brosnan instalments, would be your best bet. You’ll enjoy the fantasy, and what’s more, be spared the underlying unease that comes with bullish touches in a fantasy piece.

Of course, the argument has been made that celluloid (or digital)-created fantasies supply us the opportunity to offload pent-up frustrations and/or a sense of powerlessness, and to live vicariously through the amorality of antiheroes. But, sure, while we might all like a subtle rejoinder to a dismissive boss, do we really wish to mock a rather breathless hotel maid or a timid client at a treatment clinic, as Connery-Bond does in, respectively, 1964’s Goldfinger and 1965’s Thunderball? Our Bondian fantasies - shock horror - may not be shared ones. Connery’s sixties Bond may take a beating every now and then, and may delight with his charm, but there is also something undeniably brazen - even vaguely unpleasant - about his machismo, however smoothly delivered and winningly offset with humour.

You could say this almost inhuman confidence is the frisson that other Bonds have lacked.[7] Equally, though, what the other Bonds (and the Connery-Bond of 1971 and 1983) represent is a maturation-of-sorts beyond arrogant mockery. Something lost; something gained. Connery may have been the “alpha”, and a paean to darker impulses, but on the evidence of Diamonds Are Forever, Connery may well have predated Moore in his recognition of the pleasures of a milder, journeyman / gentleman Bond – the man who recognises the tenuous nature of smirking self-assurance.


[7] The scariness of Daniel Craig's Bond has little to do with a mocking disdain towards others, and everything to do with the forcefulness of his physicality. Dalton, likewise, could be scary, but an essential decency shone through (or betrayed him, depending on your point of view), like the Connery-Bond of Never Say Never Again.