FRANZ SANCHEZ AND THE REPTILE IN VIEW 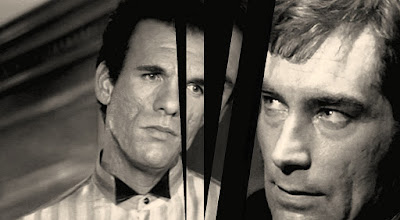 Action spectacle aside, there is a quite unique manner through which Licence to Kill grips its audience, and it involves a sliver of sympathy for its devil…

Licence to Kill (1989) is an intriguing James Bond film. Even back during the season of its release, you could be left wondering if its darker, more straight-faced tone was the long-term direction the series could afford to take. You could be thinking this even as the film was engaging you. Licence to Kill, as such, was 'ahead of its time' (despite being overshadowed by the blustery Lethal Weapons and Die Hards of its time), whereas the similar tone of 2006's Casino Royale matched the stripped-back, no-nonsense mood of a post 9/11 world.

The sixteenth official James Bond film, the second and final to star Timothy Dalton, and the fifth directed by John Glen, Licence to Kill presents a clear-cut revenge tale in its first half, with all the propulsive action such obsession implies. And then, in its second half, the action sequences fall away – bar a most impressive climactic truck chase – and talking heads predominate. It was a momentum change, most definitely (and not everyone went along for the ride), but an infinitely rewarding one nevertheless.

With the reduction in noise and spectacle, Licence to Kill begins to cast its true spell. The drug lord sadist who has raised Bond’s ire, Franz Sanchez (Robert Davi), starts to display considerable charm, and even some vulnerability. Sanchez’s code of ethics – “Loyalty is more important to me than money” – gradually reveals in him a touch of naivety, even foolish hope. His code is a raw wound that Bond exploits with a reptilian calm. And so Bond ingratiates himself into the operations and the heart of Franz Sanchez (a man with a proclivity for removing such things), and begins a campaign of instilling doubt in the drug lord’s mind as to the loyalty of his associates. This scenario is reminiscent of the Akira Kurosawa classic, Yojimbo (1961), where the wandering samurai liberates a besieged town through playing two powerful gangs against each other.

Thankfully, interspersed with these scenes of manipulation are “counter-moments” where Bond (a) exhales from the stress of remaining controlled in the drug lord’s presence, and (b) is forced to realise his tunnel-visioned pursuit of revenge has jeopardised official operations against the drug lord. The penultimate moment – occurring during a hotel room confrontation between Bond and a spritely CIA agent played by Carey Lowell – gives us a striking close-up of a spiritually deflated James Bond. A character arc is implied (this is a Bond film, after all, which precedes the explicit “Who is this man?” contemplation of the Pierce Brosnan and Daniel Craig eras); that is, that Bond has realised the costs of personal vengeance to himself and others, and must extend his unofficial mission to the “greater good”.

"What drives [Licence to Kill’s] second half is not the base desire to see revenge achieved, which is why some believe the film collapses in its second half. Rather, it is the gripping, queasy feeling that Sanchez must, at some point, realise Bond’s fraud, Bond’s betrayal of trust."

This is all very good: if not for the counter-moments, we could almost feel Bond is the villain of the piece, regardless of what our conscious mind tells us. And once Bond has realised the greater good, his body language and expression noticeably relax. It’s a terrific touch. The journeyman Bond returns – and you could take some assurance from this that a lighter Dalton film could follow this dark, if engrossing, excursion.

Some have claimed Licence to Kill is the true sequel to On Her Majesty’s Secret Service (1969), with Bond finally finding an appropriate outlet for thwarted desires for revenge. Visually, I think it’s the true sequel to Dr. No (1962), with its humid locations and overlit casinos and hotel rooms. The sweaty, pockmarked Sanchez seems borne of this humidity. But he is also darkly handsome, and he practically glides through proceedings with an understated assurance. He has moments of doubt (sometimes indicated with a wan grin) and he has a fun, mocking line in the corporatisation of the illegal drug industry. The Pavlovian response for the regular Bond viewer is to like this sort of guy.

To make certain our liking doesn’t get out of hand, Sanchez is given a whopper of a sadistic moment in the film’s second half – and he also articulates his desire for empire expansion. Now, we may on some level empathise with the manipulated man, and even relate to his increasing confusion (and the need to regulate it with laughter, albeit of the tellingly hollow kind). But when he throws a colleague into a decompression chamber, it is a spectacular reminder of the depravity of the man. If this is good business, then there, for the grace of God, go all of us. More memorable, though, than the resultant guts is the tight close-up on Sanchez’s face as he increases the pressure. John Glen refrains from using tight close-ups until they can really count. And through his restraint, they most certainly do.

"This vacillating Bond has already tested our sense of what level of intensity a Bond film can tolerate, whereas the quipping, suave Sanchez provides occasional respite, and an escape to the jollier model of Bond film we only very recently left behind."

What drives the film’s second half is not the base desire to see revenge achieved, which is why some believe the film collapses in its second half. Rather, it is the gripping, queasy feeling that Sanchez must, at some point, realise Bond’s fraud, Bond’s betrayal of trust. When that moment of realisation does occur, and the foundations of Sanchez’s empire are literally crumbling about him, Sanchez’s brief, furious rant at an underling (starting with “I don’t give a shit about the set-up!”) is powerfully cathartic. Sure, he’s depraved, but, well, so was Al Pacino’s antihero in Scarface (1983).

The encounters, then, between Bond and Sanchez are, in their own simmering way, as memorable as the powerful action sequences (waterskiing behind a small plane, a convoy of trucks on treacherous, desolate roads). There is an intensity in these scenes, but there is also the emotional engagement that comes through the back-and-forth shifts in empathy (however illogical at face value). It can be dizzying at times. “Seňor Bond, you have big cojones” is Sanchez's plain response to Bond’s dismissal of his men, and again, on some level, we’re right there with Sanchez. Later, a joshing, yet unsettled Sanchez asks, “Those men who tried to kill me. Who would so such a thing?” And Bond is relentless, delivering “Someone close to you” without a single comforting beat. This vacillating Bond has already tested our sense of what level of intensity a Bond film can tolerate, whereas the quipping, suave Sanchez provides occasional respite, and an escape to the jollier model of Bond film we only very recently left behind. (Although a number of sequences in 1985’s A View to a Kill, along with its ghastlier than usual super-villain, suggested something very nasty was just around the corner.)

Licence to Kill may not give us the sort of giddy pleasure of earlier Bond films or, indeed, subsequent Bond films. But in terms of the unique manner with which it engages, and by unique I mean in relation to the Bond formula we then knew, it seems most deserving of any praise that comes its way. Unlike 2012’s Skyfall, or some of the 1990’s Brosnan films, backstory is not used to give its super-villain odd moments of sympathy. These moments are instead achieved through playing on audience experience and understanding of interpersonal manipulation. And therein lies the chill of this escapist flick.